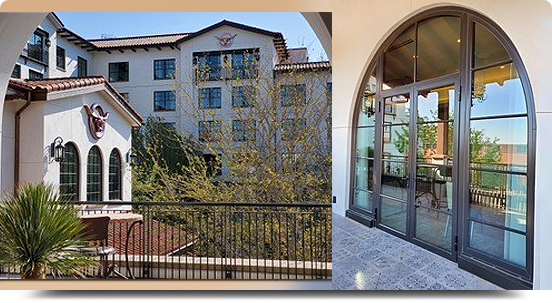 The Drover Hotel, a combination of rustic western atmosphere and luxury accommodations, is a new addition to Fort Worth’s historic district. Graham’s popular steel replica window was the developers’ choice to compliment the façade.

Rich with history and tradition, The Fort Worth Stockyards Historic District is a source of pride for the 13th largest city in the U.S. From the latter 19th century to the mid-1950’s, Fort Worth was a major center for every facet of livestock trade. Opened for business in 1890, the Stockyards were an organized place where cattle, sheep, and hogs were sold and slaughtered. Business saw peak production in the 1940’s, processing 5,277,496 head of livestock during WWII. The area was added to the National Register of Historic places in 1976.

In modern times the famous district is celebrated for its past and hosts a vibrant selection of restaurant, entertainment and shopping venues which embrace its “Cowtown” heritage.

The Drover is part of a Mule Alley redevelopment lead by Majestic Realty and The Hickman Company. It’s part of the Marriott’s Autograph Collection, a selection of distinctively designed hotels that capture the independent spirit of their locales.

In all, Graham provided 625 windows to fill 347 openings, which came in a variety of shapes and sizes. The majority were filled with Graham’s SR6700 Steel Replica fixed window, a product that simulates the appearance of traditional steel windows with thin sitelines and a beveled design to simulate “putty” glazing.

Check back with us soon for the upcoming full case study on Graham’s involvement with the Drover Hotel project.

Not Too Cool for School
Replacement windows were part of a series of renovations and improvements at Norwood Elementary School in Ohio recently. Graham’s GT6800 series windows stand out.
The GT6800 series is designed for thermal performance, utilizing a …

Electric Works Powering On
The site of former G.E. Electric Works in Fort Wayne, IN is undergoing a massive renovation. The developers’ vision is to transform the once derelict location into a mixed-use district of “innovation, culture, and community.” …

First Reinforced Concrete Skyscraper Gets Repurposed
Built in 1903 in Cincinnati, Ohio, the Ingalls Building is the world’s first reinforced concrete skyscraper. The 16-story building was designed by the Cincinnati architectural firm Elzner & Anderson and was named for …

A Modern Workspace for the Modern World
Construction is nearing completion in Midtown Atlanta on the sizable and amenity-rich Atlantic Yards project with a projected completion date this summer.
Offering over 523,000 sq. ft. of office, restaurant, and retail space, …

The recent acquisition of Graham Architectural Products (GAP) by Oldcastle BuildingEnvelope® (OBE) brings together two businesses with a wealth of products and experience.
“The Graham name has been synonymous with high quality and innovation for …

The Jasper
In May of 2020 we first reported on this historic renovation project in Charleston, SC, a 219 unit multifamily and commercial complex in the heart of this historic town.  Built in 1949 and named for a Revolutionary War …