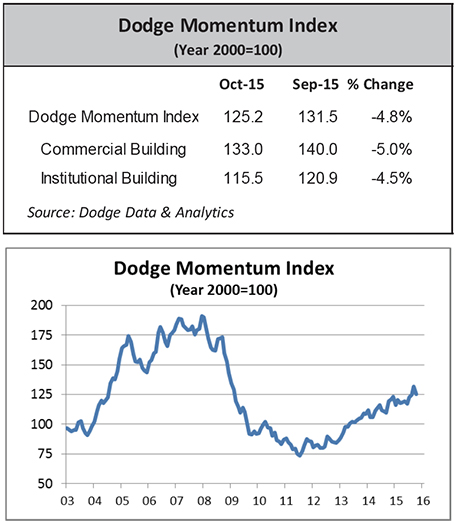 While October was not kind to the Dodge Momentum Index, Dodge Data & Analytics nevertheless expects the current construction expansion to continue through 2016.

According to the Dodge report, nonresidential building will advance 9 percent in 2016, with residential increasing 16 percent.

Meanwhile, the Momentum Index, a monthly measure of first reports for projects in planning, fell 4.8 percent in October. Those reports have been shown to lead construction spending for nonresidential buildings by a full year.

Nevertheless, the Index is up 4.8 percent compared to October of 2015.

In other economic news, construction employment increased by 31,000 in October, following months of little change, according to the Bureau of Labor Statistics. That hiring hike brings the number of construction jobs added in the past 12 months to 233,000.