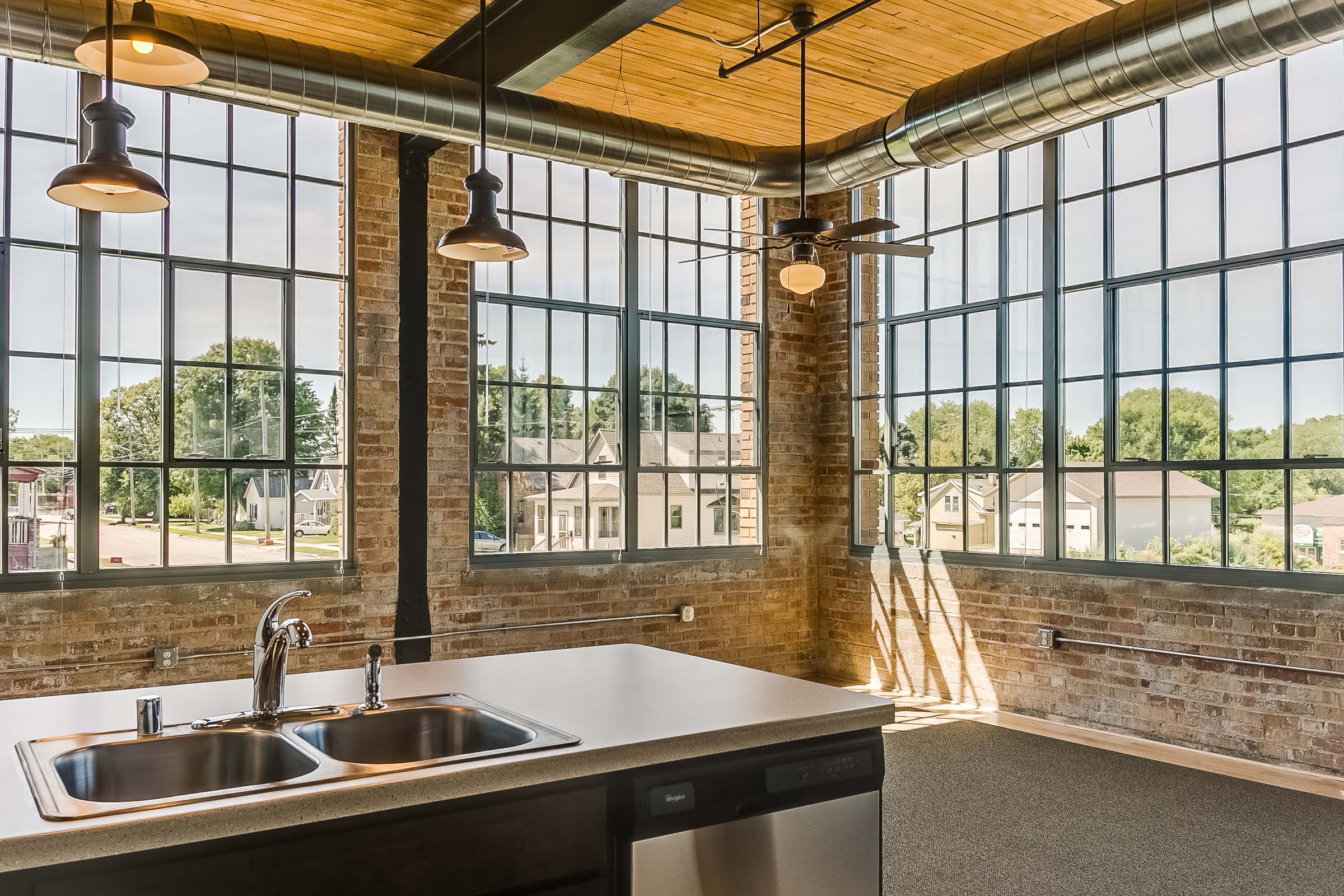 The Mirro Aluminum Company was once the world’s largest manufacturer of aluminum cookware, and for years Mirro Plant #3, built in 1929, was a center of Mirro manufacturing in Manitowoc, Wisconsin.

Production ceased in the building in the early 60s, and more recently the structure seemed to be dying a slow death, with only the first floor occupied.

Now, though, Mirro Plant #3 has been reborn as Artist Lofts, a 40-unit, 2- and 3-bedroom apartment building. Windows from Graham Architectural Products (GAP) overcame a key challenge in helping to bring about the transformation.

Mark Knapp, AIA, principal architect at Quorum Architects Inc., explained, saying.  “Old steel sash warehouse windows require a very specialized replacement window due to the very narrow sightlines of the frame, sashes and muntins. Additionally, the original single-pane steel warehouse windows at the ground floor parking garage were being maintained for historical reasons and the new windows would be seen in a side-by-side comparison to the originals.”

Graham’s SR6700 – a steel replica window that brings modern performance to the classic look of windows commonly installed in mills and factories throughout much of the 20th century – proved to be the ideal solution.

Dave Rhoda, senior project manager for Catalyst Construction was impressed, saying, “During the project, when the window replacement started to occur, you could stand across the street and look at the windows on the first floor which were [being retained], and the windows on the floor above which were being replaced, and it was a great match. You couldn’t really tell the difference between the existing and the new. That is exactly what we’re trying to do in a preservation type project.”

All told, the project required over 300 of Graham’s SR6700 windows in 12 different sizes. Rhoda also credited Graham Rep Mark Henry and the GAP team for its “help on the front end with details and making sure that everything would meet National Park Service and State Historical Preservation Office (SHPO) requirements for the window replacement.”

In addition, Graham created a custom interior three-dimensional muntin, as well as a custom subsill that simplified the installation process and ensured weather-tight performance.

Rhoda added, “From their ability to match the existing design and from a customization standpoint, I think Graham did a great job. They were fantastic. They were great to work with all the way from pre-construction through construction.”

Kristine Giornalista, vice president, real estate development, for Impact Seven, Inc., which developed the project along with Wisconsin Redevelopment, LLC, said, “It was super important for us to get these windows made by Graham to meet the SHPO’s expectations. I think it’s important to say that the windows were a critical piece to us getting the federal and state historic tax credits.”

In the end, Artist Lofts received over $3 million in federal and state historic tax credits. Those credits are paying off. According to Impact Seven, it’s the highest-rated energy efficient multi-family green development in the history of the Wisconsin Green Built Home program. It also won a Neighborhood Development Award from Progress Lakeshore, a regional economic development organization, and is now listed in the National and Wisconsin Registers of Historic Places.